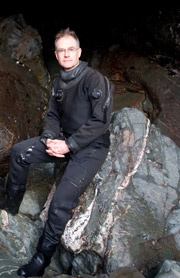 Biography
Crispin Hughes was born in London in 1959. He studied English at Cambridge University and Photography at the University of Westminster. In 1984 he co-founded Photofusion, one of the country’s leading photography galleries and education centres.

In the 1990s he began working extensively across Africa as a photojournalist covering conflicts in South Sudan, Rwanda, Angola and Somalia. He has worked for numerous aid agencies across Africa and Asia. He became a member of the picture agency Panos in 1990 and his work appears regularly in the national and international press.

Active consent is characteristic of his documentary photography of social issues, working with the people involved to make un-contrived but collaborative pictures.

Since 2005 he has collaborated with filmmaker Susi Arnott on a series of exhibitions about tidal spaces: Unquiet Thames at the Museum of London in Docklands examined urban, enclosed, tidal spaces along the Thames shoreline. The exhibition was one of Time Out’s twelve picks of the year. Stone Hole (2009 at Photofusion and Peninsula Arts) scrutinized the interiors of tidal sea caves. These large scale prints challenged conventions in art that link landscape with beauty and moral uplift.

Thames Tides (2016), a four-screen immersive projection using floating cameras, toured watery exhibition venues around London. Duck (2019 at The Bargehouse Gallery) continued the use of autonomous cameras to develop a random aesthetic concerned with anthropomorphism and point-of-view.

Since 2007 Crispin has been the photo-educator for the Through Positive Eyes project, a collaborative photo-storytelling project by 130 people living with HIV and AIDS in 10 cities around the world.

Unquiet Thames.  The underbelly of the Thames in central London at the Museum of London in Docklands. (Time Out’s no.1 critic’s choice.  Feb – June 06).

Pressure Underground: Getting the Jubilee Line to Work. Exhibition at Photofusion Gallery and book.

Too Late for Dreams: conflict in South Sudan.  Exhibition at Photofusion Gallery.

Leap of Faith. (with Chris Boot).  Exhibition at The Photographers Gallery. Piece commissioned by David Chandler for The Invisible City.

Treatment (with Chris Boot) in Bodies of Experience. At Camerawork Gallery.

Photo-Educator for UCLA ‘Through Positive Eyes’ HIV participatory photography project in ten cities across the world.